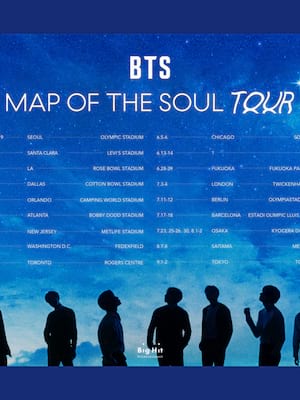 The biggest selling K-Pop artists of all time!

South Korean pop stars Bangtan Boys return to North America with their Map of the Soul tour. As the group take on another world tour it's safe to say that this septet are leading the charge of the K-Pop takeover! The K-Pop megastars returned from their Love Yourself tour less than a year ago, and are already raring to hit the road once more. Their recently released single 'Black Swan' is the first track on their upcoming album, Map of the Soul: 7, which is set to be released late February.

Known as BTS, which translates as 'Bulletproof Boy Scouts', the group have been capturing hearts and heating up the airwaves since 2013, with the release of their first album 2 Cool 4 School' bagging them award-winning success in their native South Korea. International notice soon followed, with 2016's 'Wings' becoming the bestselling K-Pop album of all time in the US! Now they head out in support of their newest record, 'Love Yourself: Tear'. Released in 2018, 'Love Yourself: Tear' went straight to number one spot on the Billboard 200!

Yoooo! BTS was awesome like they always are. But this concert was even... more

I was so excited to see them but it didn’t live up to my expectations.... more

Sound good to you? Share this page on social media and let your friends know about BTS - Bangtan Boys at Levi's Stadium.